Your governor is a monster. 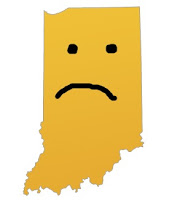 So’s mine, of course– my governor is Sam Brownback, after all. But yours might be even worse.

Why’s that? Well, because on Thursday Indiana’s Governor Mike Pence signed into law a bill that makes abortion illegal in the event that a woman seeks one because of fetal disability– any kind of fetal disability– and framed it as “a comprehensive pro-life measure that affirms the value of all human life.” As the worst monsters always do, he depicted a heinous attack on human rights as a righteous act.

Before I go into what’s so horrible about this bill, I want to first acknowledge that it’s almost certainly blatantly unconstitutional. To my knowledge, there is no legal basis for banning abortions that would otherwise be legal based on the reason a woman wants one. And Indiana’s law doesn’t just ban abortions performed because of fetal disability– it also bans abortions based on the race, color, national origin, ancestry, or sex of the fetus. Abortion was deemed a fundamental right in Roe v. Wade, and fundamental rights can’t be abridged based on a person’s motive for exercising them. One would think.

Elizabeth Nash, state issues manager at the Guttmacher Institute, made a great comment about the specifications of the bill: “They basically took non-discrimination language and made it an abortion ban.”  It’s always fun when conservatives pretend to care about diversity and egalitarianism purely for the sake of trying to make liberals look like hypocrites. What’s not fun is that this tactic is often remarkably effective, because on first blush a liberal might fully agree that women shouldn’t abort based on any of those factors. After all, none of these traits are the kid’s fault!  They’re circumstances of birth!

If we agree that a fetus is not a person (in the legal sense), then the fetus has no rights.  It doesn’t matter whether it’s freedom of speech, the right to bear arms, the right to privacy, or the right not to be discriminated against (which, again, social conservatives don’t generally support in the first place)– non-people do not have rights.

If we don’t agree that a fetus isn’t a person, which is to say, you think they are people…then every abortion is equally murder. Reasons don’t matter. We don’t just ban murders that take place because of discrimination– they’re illegal regardless.  So in that respect, passing a law that forbids abortion for discriminatory reasons is implicitly acknowledging that fetuses aren’t people.

That said, let’s get into the specific ramifications of this law, and why you’d have to be an utter sadist to support it.

1. The “disability” portion of the law forces women who know that their fetus has any sort of disability, including the ones it is very unlikely to survive, to carry their pregnancy to term. Imagine being pregnant and finding out that the being growing inside of you has anencephaly, meaning that it’s missing part of its brain, and is certain to die either before or immediately after birth. Imagine learning this in your first trimester. Imagine having no choice about whether to continue this pregnancy, because your governor wanted to “affirm the value of all human life.” Except, apparently, yours.

Because in addition to the emotional torture presented by the scenario above, being forced to continue such a pregnancy presents health risks for the pregnant woman. Brownsyne Tucker-Edmonds, an obstetrician-gynecologist in Indianapolis, commented of the bill that

It will require a woman, during one of the most devastating times in her life after learning of a fetal anomaly, to prolong her pregnancy even if against her wishes, and to potentially assume the greater health risks associated with doing so. Some women have cases in which the risk of death during a full-term pregnancy is more than 14 times higher than for a termination of pregnancy.

2.  Even if the disability is not as severe as anencephaly, something with good chances of survival for years beyond birth, how many of these women can afford to care for a disabled child?  The second most-cited reason for abortion is the woman’s inability to afford a baby.  And that’s assuming a baby without disabilities.  The value of life for a disabled person, much as proponents of this law might claim otherwise, is not at issue here.

Rather, the cold, hard fact is that if a woman considers herself unable to afford having a “normal” child, then she’s probably quite a long distance from being able to care for a disabled one.  And– big shocker here, I know— Indiana’s House Enrolled Act 1337 does not come accompanied by a comprehensive provision for generous public assistance to the women it forces into this position.

3. Under this law, doctors face a wrongful death lawsuit if they perform an abortion for a woman who requests one after learning about a pregnancy complication.  That’s certainly likely to improve relations and communication between doctors and their patients, right?

Hal Lawrence, chief executive of the American Congress of Obstetricians and Gynecologists, said the group, comprising roughly 30,000 doctors nationwide, strongly opposes the law because it could encourage a patient to withhold information from her doctor. A woman who, for example, learned her fetus carried a severe disability may pursue an abortion from an out-of-state provider and then, out of fear, skip follow-up care from her regular doctor. “She shouldn’t be under legal duress when she came back to where she lived,” said Lawrence, who practiced gynecology for 30 years. “Patients need postpartum or postoperative care. They need to be counseled for contraception. Discouraging that is highly destructive.”

4. The law effectively bans fetal tissue research. Not that clinics in Indiana participate in such currently, but this will sure prevent them from considering the idea.  And that’s because…

5. The law requires that all fetal remains, whether from abortion or even from an early miscarriage, be buried or cremated.

Normally when a pregnancy ends earlier than 20 weeks, the “products of conception” (fetal tissue and the placenta) are treated like any other medical waste. After 20 weeks, the fetus is considered a “stillbirth” and the parents typically have the option to cremate or bury it if they choose. So even if a woman has a miscarriage at 8 weeks of pregnancy at home, under this law she could be required to keep the blood and tissue, take it to a hospital, and have it buried or cremated by a funeral home. Abortion providers will probably have to take on extra costs and administrative burdens for all of those extra burials and cremations, and those costs would probably get passed on to the patients.

Then what happens if you abort or miscarry, but can’t afford to have the fetus buried or cremated?  If it’s an abortion, it sounds like you might not be able to get one at all.  If a miscarriage, well….I guess you’re just screwed.

So yeah, Indiana, this is what your governor has gotten you into. Did he think it through?  No, almost certainly not– all he saw was an opportunity to look like a virtuous pro-lifer, at the expense of every woman, and by extension most men, in the state.

Terrible piece of legislation, agreed. Unfortunately the legal basis for this legislation is hardly as pristinely unconstitutional or without precedent as is suggested here. Hate crime legislation, which is seemingly ubiquituous and overwhelmingly suppported, specifically considers the motive (particularly discriminatory) of someone committing a crime be it vandalism, assault/battery, or murder. If I hate Jews and I am an anti-semite I could get a different sentence than if I just killed a Jew randomly. Similarly if I have an abortion because the fetus is found to have some disability I could be judged differently than if I simply had an abortion with no such knowledge or motive. I'm quite sure that this would be part of any argument by legal backers of this legislation. I find hate crime legislation to be noisome and morally suspect not to mention legally problematic. But it serves as a cautionary tale if we are to combat the law recently passed in Indiana.

I considered hate crime legislation when writing this post, and didn't bring it up as relevant because of one very important distinction: a hate crime is a crime. An abortion is not.

Hate crimes are treated differently from regular crimes because in both cases a person is harmed, but in the case of a crime committed out of bigotry, you have a terrorism-like situation in which an entire group of people is threatened by your act rather than the one person you attacked. In the case of abortion, there is no person being attacked. Yes, as I mentioned in the post a well-meaning liberal might be inclined to judge the motivations of a woman getting an abortion if they sound discriminatory, but if your discrimination doesn't harm people, then it doesn't matter.

The moment I am inclined to sneer at a woman for wanting to abortion her fetus because of its race/sex/disability/etc. is the moment I remember that if I personally were to get pregnant, the fetus would be aborted before any of those things would even be discovered (well okay, except for race and ancestry). So how could she be doing an immmoral thing when I am not? It's bad to be bigoted, of course– it makes you a bad person. It doesn't follow that your reasons for getting an abortion can be immoral, if we agree from the outset that abortion could only be immoral if a person is harmed. As I said in the post, a person is harmed equally in both cases– which is to say, not at all.

It didn't occur to me before your post, but there is another downside to forcing pregnancy aside from autonomy. Conservatives often argue that a baby could be given up for adoption instead of being aborted. But if it has serious medical problems, its being condemned to a life of institutionalized care.

Yep. I'm not sure if by "condemned to a life of institutionalized care" you're talking specifically about the quality of life for a person with serious medical problems or the fact that if the mother isn't able to care for the child's highly demanding condition then the child will have to be institutionalized, but both are part of the fallout of this horrendous law.