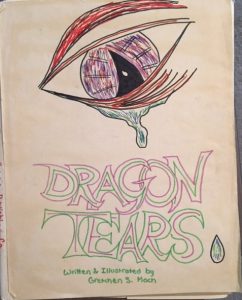 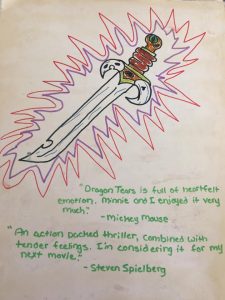 A book written and illustrated by Gretchen S. Koch in the seventh grade. 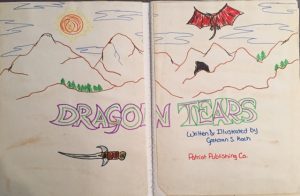 It was the year 2095, and the people of Zodak were announcing the annual hunt for dragons, and the counsel had selected the men to do so. All men over seventeen were eligible to be chosen.

Larkotyell had turned seventeen in March and was eagerly looking forward to the dragon hunt. The counsel was trusted to make wise decisions as to who would go on the quest.

The dragons fled to Zodak when their planet was destroyed thirteen years before. They brought their riches with them. As the dragons had no particular season for bearing young, their race was still not noticeably increasing on Zodak. They had the hunt to thank for this.

The yearly hunt was organized to collect the treasure of the dragons, and many of their skins as well.

Larkotyell’s father had been killed on one such hunt by a crazed dragon, as the son was told, and Larkotyell was determine to go on the hunt to avenge his father’s death. He knew little of his father, not anything of his values, as Larkotyell was quite small when his father had died, but he believed this was what his father wanted. Every day he waited impatiently for the invitation to come; every day it did not. 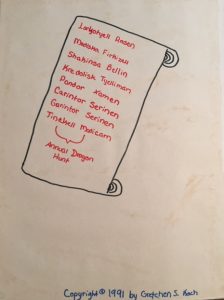 His coin bag jangled against his leg; his leathery boots made no sound on the soft turf of the dusty road. Mikyeren had eight more people to tell of the hunt, and his breath was running out.

The tall, silvery dome house of Larkotyell was his destination, and it shimmered in the distance.

The messenger cursed. “Drat! I should have brought my shorgum.” Mikyeren’s shorgun was at home sulking from a long ride and refused to wear his saddle. “Oh well,” Mikyeren thought. “I’ll need him for the hunt, so he might as well rest up.”

Presently the dome house of Larkotyell was reached. It was the house of the late Mansotyell, the deceased father. Mikyeren was admitted into the house and waited in the entry hall until a form appeared out of the wall near him. 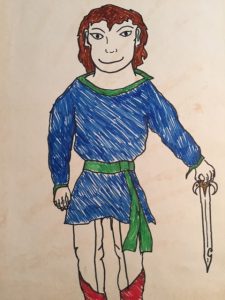 “Greetings, friend. What message do you bring?” Larkotyell’s voice remained level in spite of the excitement behind it.

“Larkotyell, I bring tidings of the great hunt. Several warriors are listed on this invitation.” He pulled a list out of his pocket and offered it to Larkotyell. “And you are included.”

With this, the messenger sped out the door, eager to deliver the rest of his summonses. 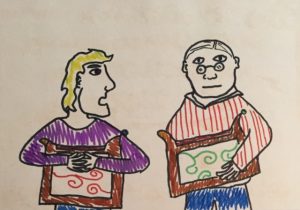 At the saddle shop, old Mekkle turned to his carrying boy. “There’s gonna be a hunt– have ‘ya heard who’s goin’?”

The old man’s eyes widened. “Even with his father’s actions? It’s been years since someone’s tried to save those dragons– boy, he paid for it. And with a son so sensitive, too.”

“The counsel believes he can handle it, sir. They want to turn him to their way of thinking before his father’s side takes over.” 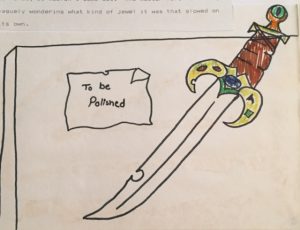 Swords lay in rows gleaming on the table at the armory, and one caught the master’s eye. It was there to be polished– he couldn’t make one that splendid himself. The tip was slightly curved; the blade had some kind of inscription on it– “To Larkotyell, my son. Always listen to what’s in your heart.”

All sorts of precious stones adorned the handle, but one stood out the most. It was a perfectly round stone– odd enough in itself, since they were so hard to carve– but even more strange was the appearance. The stone looked almost like an eye.

“The bearer of this sword is one I wouldn’t want to reckon with,” the master thought. “And rich, too. I bet that one on the end is worth many gold pieces.” He fondled it– drat, it wouldn’t come out. The master left for home, vaguely wondering what kind of jewel it was that glowed on its own. 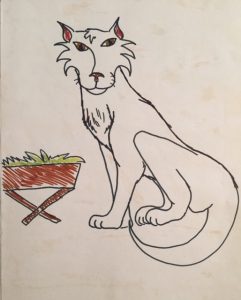 Down at the stables, Talorman’s fur ruffled. His master was uneasy about something, that was for sure. But what? He had a feeling Larkotyell didn’t know, himself. What was there to be worried about? There was a hunt coming up– no big deal. Dragon hunts were always easy before– why wouldn’t they be, now? Talorman figured it must be something more than that. He and other shorgums had always been able to read their masters’ thoughts before. What was happening in Larkotyell’s feelings? 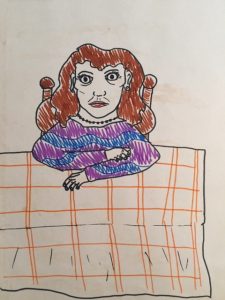 His mother weeping by the door, Larkotyell donned his best armor and readied Talorman’s saddle.

“Mother, this is a duty of honor. Do you not want me to prove my skill?”

She couldn’t finish. The door had closed before the words came out. Sari-tyell sat down and let the tears roll down her face.

Riding to camp had been difficult. Rocks were everywhere, but though the shorgums’ hoof-hard feet could feel them, they could not be hurt by them. Talorman needed a good rubbing down. His muscles under the thick white coat were getting stiff.

Shorgums had no mane as our horses do, and their faces were quite different. More cat-like, although the body was too upright to be a horse and too low to be that of a kangaroo. Shorgums were shorgums, and that was that. Shorgums were used for the hunt primarily for their endurance and good ability of sniffing out dragons. 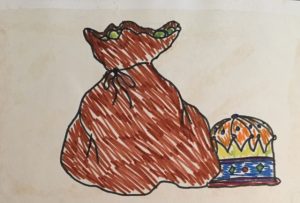 Dragon blood was what the hunters were after, that and dragon gold. Dragons collect gold only for its beauty and nothing else, though men have much different purposes for it. The hunters were eager to come back rich men with the booty of the dragon treasure. Not much was known of the dragons, only that they stored piles upon piles of treasure in their lairs and sometimes lived for thousands and thousands of years. When the rarity of a dragon cave was discovered on a hunt, nothing was spared in the taking. 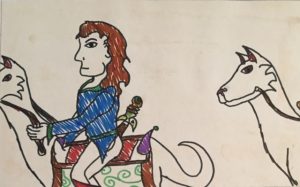 The rocky terrain seemed to go on forever as the dragon hunters rode along in silence.

“Heads up, men! My shor got a whiff of one!” the leader suddenly called from the head.

Sure enough, a red dot appeared to the east. The hunters readied their swords, preparing to wound the witless animal severely but not kill it, so that they could make it lead them back to its lair. Larkotyell yanked at his father’s sword, only to discover that it wouldn’t come out of its sheath. He pulled again, and still the blade would not give. He quit trying and looked up. 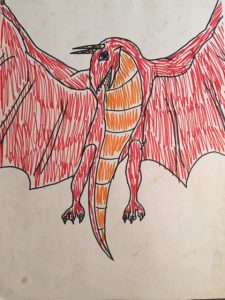 A magnificent sight greeted Larkotyell’s eyes. The dragon was a male; this was revealed by his fiery red scales. Female dragons had scales of emerald green, bright contrast to their mates. Larkotyell knew this from the schoolbooks he had studied, learning year by year how to rid his planet of these loathsome creatures. But as he gazed up now upon the flying apparition, it did not seem so loathsome.

“Thou hast murdered by mate!” it screamed down in a hawk-like voice. “I have waited for your next hunt, for your race hast slain my mate for thy greed! Where dost thou get thy evil?” The dragon’s voice cried out to them now, beautiful tears falling quietly from his violet eyes.

Larkotyell was amazed. In all of his studying of the dragons on his planet, the real truth had never been revealed. The sword stone glowed brightly. His father’s feelings had been carefully guarded since his death. The son had never heard the real story as to how his father had died. Larkotyell had heard numerous stories in childhood about dragons stealing babes and snatching children off the streets. “Stories to feed man’s greed,” he thought. “There is love on this planet, and its beauty is hidden by lies.” 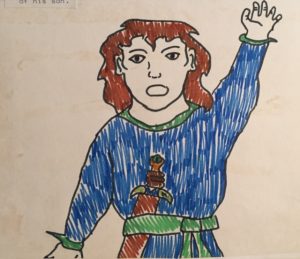 Thinking this, Larkotyell realized his group was at the ready to slaughter this creature, swords drawn and shields bared. Shouts of hunting and war cries filled the air…

It took a moment to realize he had said this. Larkotyell spoke to his friends.

“Do you not see what this creature is saying? We are fighting for greed, on the side of evil. How can you witness what love and life are all about and then destroy it? Friends, gold is worthless compared to the life of one who loves.”

Larkotyell’s sword stone shone with a full power and brightness it never had before– for you see, some of his father’s soul was still contained within, and he was proud of his son. 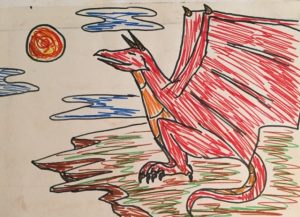 Larkotyell never returned home after that hunt. His hunt mates abandoned him for a lunatic. But Larkotyell had done what his father had, and escaped when his father had been murdered by his comrades. Larkotyell kept his sword to the day of his death, which was at the side of the dragons. 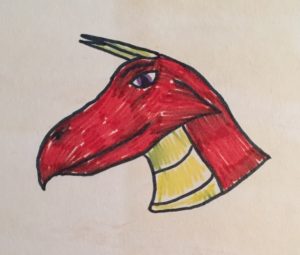