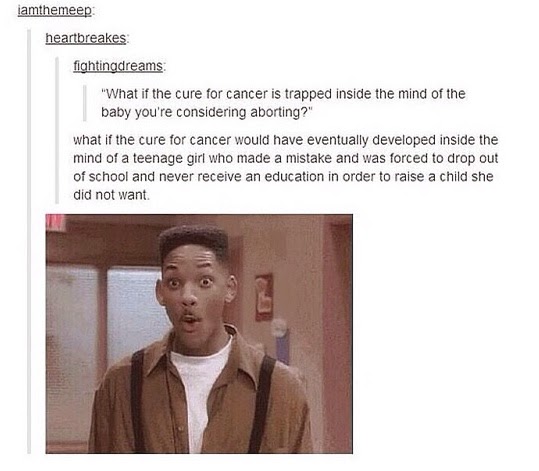 I love this because it illustrates some really bizarre assumptions and why they’re bizarre.

Like the all-too-common-among-pro-lifers assumption that an unborn fetus represents absolutely limitless possibility. Unborn fetuses are positively magical that way– they could cure cancer, end world hunger, invent a perpetual motion machine, anything! They could save the world in a thousand different ways! Instead of, you know, fates that could be considered more likely for unwanted children, which aren’t nearly so sparkling and brimming with promise.

Whereas the actual already-existing person in this equation, the woman, is granted no potential at all. Presumably because of the fact that she’s pregnant, which means that she’s a woman (yes, obviously) but also the assumption is that she screwed up somehow (this is even granted in the quote, but it ain’t necessarily so– most abortions aren’t given to teenagers who screwed up) and must therefore be a loser, slut, etc. who would amount to nothing whether she got pregnant or not.

Women? They don’t cure cancer. Especially not the ones dumb enough to have unplanned pregnancies, amiright? Ha ha…ha…..ha…..urgh.