I am no longer allowed to comment on creationist cartoonist Dan Lietha’s Facebook posts. Lietha does the After Eden cartoon on the Answers in Genesis website, and I’ve become somewhat fascinated with his work because it combines some quite respectable artistic talent with some absolutely baffling apologetics. And here I don’t say “baffling” to mean “difficult to refute,” but rather just plain weird.

I’ve taken the piss out of his cartoons on a couple of occasions, but that is almost certainly not why I’m now banned as Facebook commenter. Rather, it’s because he has a rule against what he calls “debating,” and what I call “correcting.” I’ve never been rude in my corrections, and we actually had a positive exchange once, but at some point after that I discovered that my input is no longer welcome. That actually hurts a tiny bit.

But back to the weird apologetics. This one was posted today– I have no idea why he chose to do a response to Ellen DeGeneres.

Was some big fuss made about her space alien comment? It seems fairly unremarkable to me.  I’m glad for the caption, as I might’ve confused her for Ryan Gosling otherwise. The sentiment sounds like a reply to a quote from Arthur C. Clarke:

Two possibilities exist: either we are alone in the Universe or we are not. Both are equally terrifying.

“Terrifying” isn’t the word I’d use– fascinating is the word I’d use.  And DeGeneres seems to agree, because she doesn’t think much of humanity apparently.  I think humanity’s great, but the chance of intelligent life elsewhere in the universe is fascinating because of the sheer possibility of what that intelligence would be like. We only know our own, so far, and not that well honestly. And part of developing self-awareness is contrasting the self with others, so it would sure be nice to have some “others” to contrast ourselves with.

And given the immensity of the universe, it would be fascinating if there wasn’t another form of intelligence on the level of humanity on some other planet, because even though it took the better part of 4.5 billion years in the time that Earth has existed for humanity to come along, it did happen. And there might be as many as 40 billion habitable Earth-size planets in our galaxy alone. That’s a staggering thought.

But given that Lietha is a creationist, I suppose it isn’t staggering at all. I suppose he thinks that’s outright nonsense, which is pretty staggering in itself.  But the chances of someone who thinks the Earth is 6,000-10,000 years old being able to consider the ramifications of 40 billion possibilities of human-like intelligence in the Milky Way really couldn’t be that high, could they?

I suppose the logic at play here bothers me the most. The cartoon just claims the non-existence of aliens as a flat fact, apparently based on the fact that fictional aliens exist.  How much sense does that make?  That would be like me saying that gods other than Jehovah, gods that Lietha considers to be fictional, exist, therefore…. 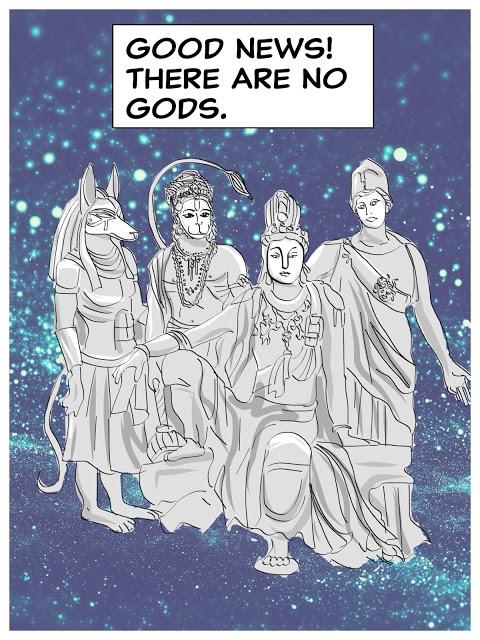 Not very convincing, is it?

Sadly there are those that have to struggle tooth and nail to make their mythology relevant today. Something that is getting more and more difficult to justify. The old mythologies didn't die overnight and the current batch won't either, but die they will and evidence is showing progress in that direction. Scary thought is if something will try to fill the void. History shows that never ends peacefully.