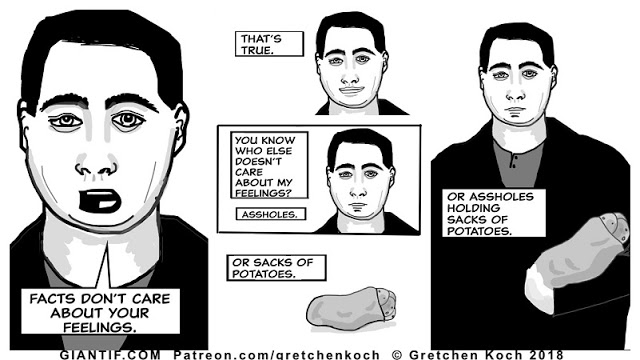 It’s trivially, and sometimes importantly, true that facts don’t care about your feelings. Facts don’t care about anything at all, because they are incapable of caring, but the point being made in this case is that facts are true regardless of how much you may not want them to be true. Neil deGrasse Tyson put it another way: “The great thing about science is that it’s true whether or not you believe in it.”  And he was right– it is great.

However, there is also a sense in which “Facts don’t care about your feelings” can be self-justifying and bullying.

It’s self-justifying because telling yourself this when someone is reacting emotionally to your statements, especially angrily as a rejection of those statements, means you can use this to convince yourself that the statements are, indeed, facts. Why would someone get so pissed off about something that isn’t true? They just can’t handle the truth!

And it can be bullying in that “facts don’t care about your feelings” carries an unstated addendum “…and neither do I.”  Having feelings about anything at all, and allowing them to affect your decision-making, is often denigrated as inherently irrational, even though we would be severely handicapped in our ability to make decisions without those feelings.  Right now many conservatives in America are relying on this presumption alone– that people with strong feelings about something are incapable of thinking about it reasonably– to try and shut down the arguments that Parkland students in Florida are making for increased gun control.

They’re correct about one small part of that– people who are hysterical are often not good decision-makers. When we want to suggest that a person’s emotions invalidate any views they hold by rendering them irrational, we use words like “hysterical,” “apoplectic,” and especially “outraged” to indicate the presence of an emotional reaction so strong as to cause a person to lose their grip on reality. Which is, of course, just dishonest when in fact they are simply displeased or angry.

Anger can, in fact, be a powerful and productive motivator– Lindy West described feminism as “the collective manifestation of female anger” in a recent essay for the New York Times. Passionate people get things done– that’s why people who don’t want those things to get done are so dismissive and fearful of that passion.

And if “facts don’t care about your feelings” means “reality exists independently of your reaction to it,” then it is simply fallacious to insist that emotional people can’t make rational statements. It’s an ad hominem fallacy, in fact– attacking the person making the argument rather than the argument itself.  If facts are impervious to feelings, then you could have all of the feelings or none of the feelings and that would be irrelevant to whether or not you also have the facts.

For these reasons, I went a little into the realm of the absurd with today’s cartoon. Also because “facts don’t care about your feelings” is just especially galling when it comes from the mouth of someone with a record of taking or leaving facts according to (irony?) how he feels about them.