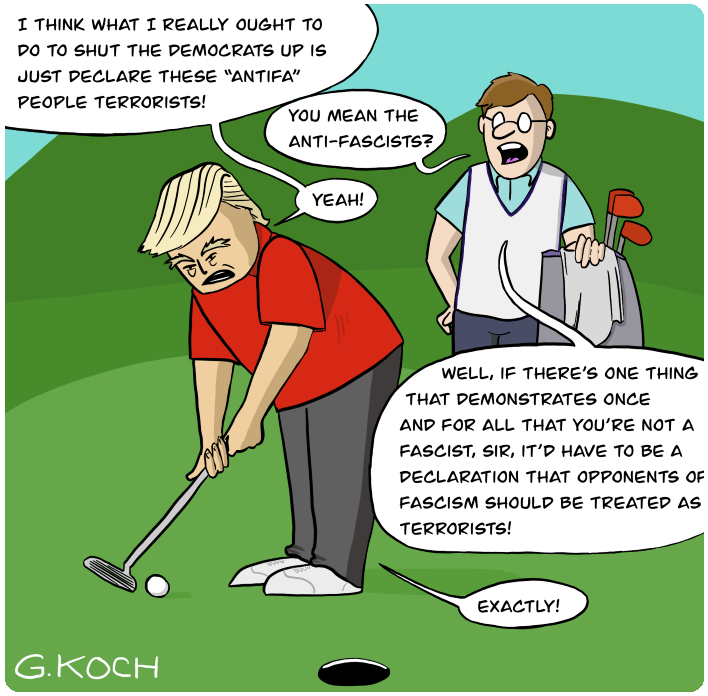 The president tweeted recently that he’d like to classify Antifa as terrorists.

The problems with this are obvious and manifold, starting with the fact that Antifa is not an organization, but rather a movement with lengthy historical roots and no particular markers that signify “membership,” because again– not an organization. There’s a list going around on Facebook describing the ways in which this could be legally used to justify punishing any kind of dissident. On Twitter, the hashtag #IchbinAntifa started among Germans noting that “German history obliges us to stand up against racism and fascism. On the street and in Parliament. #NeverAgain.”

Trump blamed them for “hitting (only non-fighters) people over the heads with baseball bats,” using a bizarre parenthetical which I’ll ignore because I don’t know what it means, but I would point out that a) milkshakes are a far more common choice, and b) the total death count for Antifa for 2018 was 0.

Yep. zero. Doesn’t it seem like people ought to kill at least one person in order to be branded as terrorists? If we’re designating people as terrorists based on modern political neologisms, which I think I’m pretty firmly against, why haven’t the incels gotten any love? Here’s a list of some of their violent attacks going back to 2014 when their patron saint Elliot Rodger did his thing.

Oh yeah, I think I know why– incels are murdering women because the ones they want to sleep with won’t sleep with them, whereas Antifa are throwing milkshakes at people for supporting fascism.