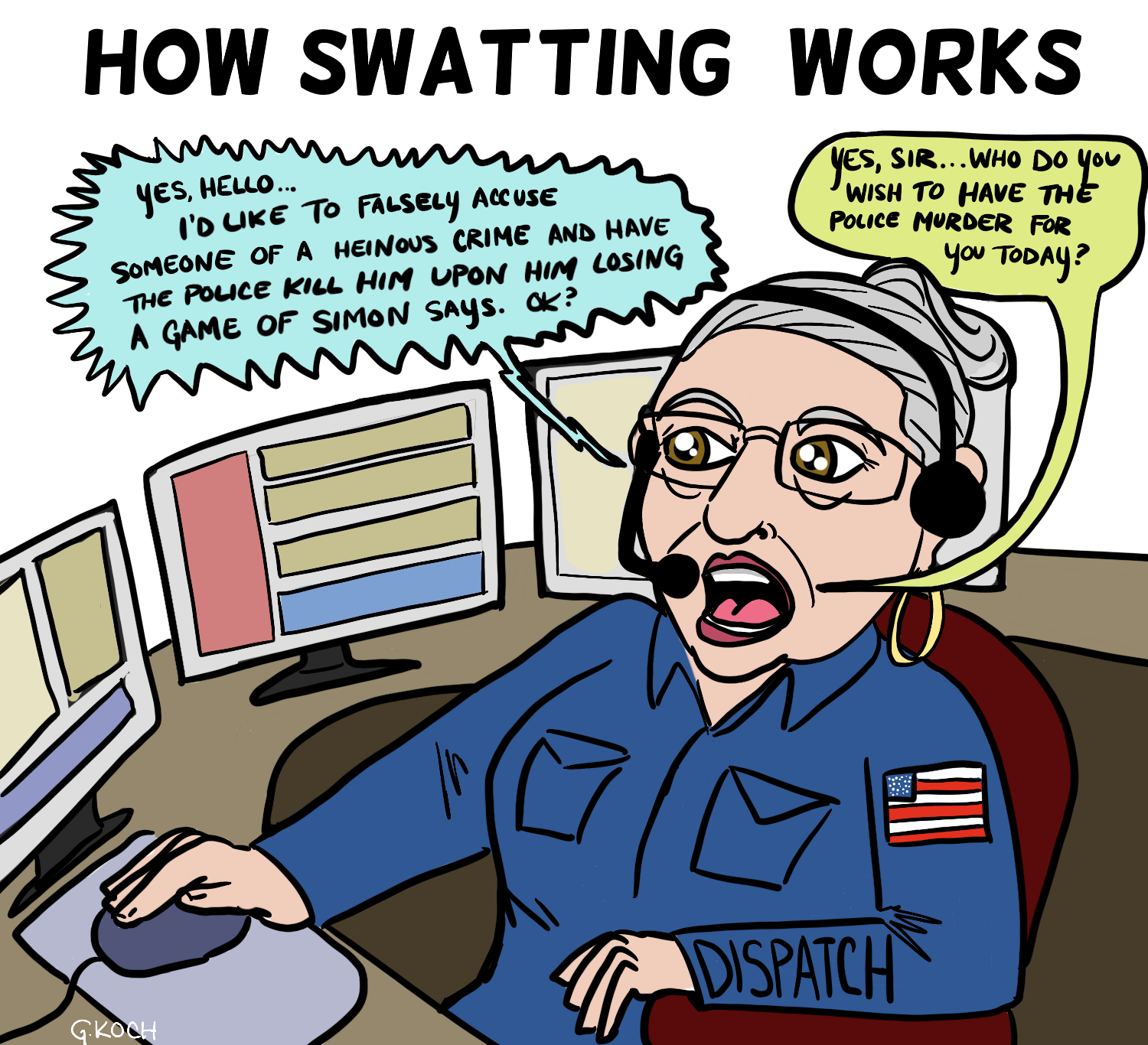 On December 28th, 2017, a man called Andrew Finch was killed by police here in Wichita, Kansas. Earlier a bet between two men over a Call of Duty game had gone sour, with one, Casey Viner, threatening to swat the other (that is to say, send the police to his home by making a false accusation against him), and the other man, Shane Gaskill, giving an address in Wichita and reportedly saying to “Bring it.”

The address was Finch’s. Finch did not know either of these men and was not known to be a gamer, much less participate in any bets over Call of Duty matches. The swat call was not made by Gaskill, but rather by a homeless man called Tyler Barriss who apparently made swatting calls for money. Gaskill gave Barriss the address, and Barriss used the VoIP through the Los Angeles library free wifi to call Wichita City Hall (because of course, calling the police via 911 will call your local police department, not the police department of whatever false address for a home containing real people was given to you by someone angry about a bet over a video game on the internet).

Wichita City Hall dutifully transferred the call to the local Wichita police (!), who were told by Barriss over the phone that he, going by the name “Brian,” was at the swatting address he gave (Andrew Finch’s residence), and that he’d already shot his father, was holding several family members at gunpoint, and was planning to set the house on fire.

So Wichita police hastened over to the house, as you’d expect, and surrounded it. It was dark outside and cold (being the end of December in Kansas) when they convened across the street, focusing on the front porch of Finch’s house. Andrew Finch’s mother, Lisa, reported that he heard a noise outside and went to the front door to investigate. At that point the police apparently ordered him to put his hands up, which he did, but then seemed to lower them a bit. A single round was fired by an officer across the street, Justin Rapp, which pierced Finch’s heart and right lung. Andrew Thomas Finch, 28, father of two, was taken to a local hospital and pronounced dead shortly after. His family were ordered out of the house, handcuffed, and taken to the police station for questioning.

Federal charges were filed against all three of the men involved in the orchestration of the swatting — Barriss, Gaskill, and Viner. Barriss received a sentence of twenty years in prison. Viner pled guilty to charges of conspiracy and obstruction of justice, and received a 15 month sentence and two years’ probation. Gaskill, who had given his old Wichita address (which became Finch’s current address) to Viner, was charged as a co-conspirator but struck a deal for deferred prosecution that could allow the charges to be dropped.

No charges were filed against any police officer for Finch’s death.

Finch’s niece Adelina, 18, who had lived with him since 2002 and witnessed his death, committed suicide in March of this year. Finch’s mother Lisa was quoted as saying “I scream internally every second of every single day and it’s never going to stop.” The Finch family is now suing the City of Wichita for $25 million in damages for Andrew Finch’s death and their pain and suffering.

This is a post about why I think they should get it.

My primary reason for thinking so is that we don’t want to adopt a policy as a country that all a person need do, if he or she wants another person dead, is to call up the police and make a false claim against that person, thereby “siccing” the police on them like a trained attack dog. Police officers are human beings with human abilities like empathy and critical thinking, and should be expected to exercise those abilities. If all that is required is a simple accusation > locate and kill logic string, then we should scrap police entirely in favor of enforcement droids such as ED-209 from the movie Robocop.

Ah, but you might say, they didn’t simply locate and kill Andrew Finch! They surrounded his house and aimed guns at him, yes, but no shot was fired until Finch had disobeyed police orders by lowering his arms!

I would like you to imagine spending a quiet evening at home with your family, as Andrew Finch was that night. You hear a noise outside, and go out onto the porch to investigate. Immediately you hear a bunch of voices yelling at you. There are bright lights, probably some of them blinding you, and you have no earthly idea what is going on. The voices are yelling over each other, and it’s difficult to understand what they’re saying. You’re probably hoping it’s the police, because you didn’t do anything wrong and the police wouldn’t shoot you for the heck of it, would they?

Something has got to be catastrophically wrong, but you don’t know what. You put your hands up over your head, but then…something causes you to lower them again.

Maybe it sounded like one of the yelling voices was telling you to.

Maybe it sounded like they were asking you to get on the ground, so you were moving in that direction.

Maybe an injury makes it painful to hold your arms up high.

Maybe, facing this cacophony of confusing sounds and sights, you get lightheaded and confused.

Maybe you lose your balance.

You lower your arms. A bullet rips into your chest. You scream loudly enough that your mother hears you from inside the house, and then you fall down. Shortly thereafter, you die.

Over the next couple of years, not only does the man who killed you suffer no repercussions for it, not only is your family harassed and has their property confiscated by police officers who know full well by that point that you were swatted and not a suspect in any respect, but people have the nerve to say that you deserved to die because of your failure to obey police instructions.

You lost a fatal, impromptu game of Simon Says, and this is the consequence. Oh well, swatting is bad, let’s put those swatters in jail for a very long time, but it’s not the fault of the police officer who shot you because after all, you did drop your arms.

This is not an apportionment of responsibility that our society can sustain. No person should be entrusted with the task of protecting and serving a community who treats an accusation over the phone (that came from City Hall — did any of the police officers involved know this? It doesn’t sound like it) as sufficient evidence to treat someone as if they’re some kind of supernatural-level threat sufficient to justify killing them from across the street if it looks like they lowered their arms when they weren’t supposed to.

I sometimes wonder if people’s sheer bafflement at the notion that swatting is even a thing (using the police to murder someone because you got angry at them over the internet? Seriously?) contributes so much to their well-justified fury at the swatters that they don’t stop to consider that swatting wouldn’t work if police officers weren’t so amazingly, profoundly trigger-happy.

If they exercised a scintilla of critical thinking and reconsidered the story they’d been told about the behavior of this baffled man standing on his porch, blinking in the lights and shivering in the December cold, before putting a bullet into his heart.

This is how swatting works.

It shouldn’t work at all.