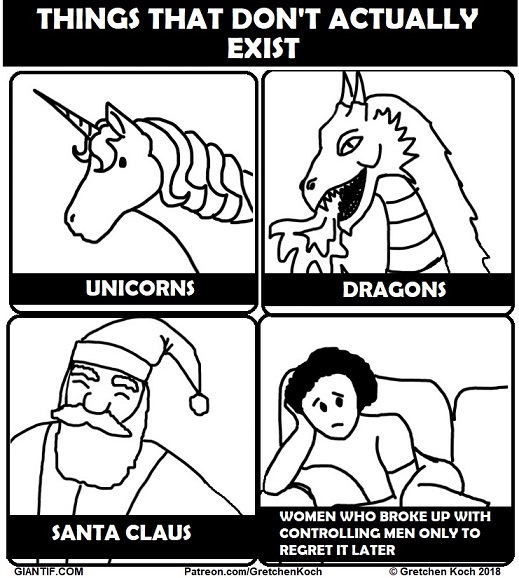 I got– and am still getting– a lot of feedback on my Facebook post of Ijeoma Oluo’s tweet about how her niece who “dumps any dude the moment he tries to make her feel less than she is in any way.”

Most of it by far is from women, tagging other women into the thread and saying things like “This is totally you,” or “This is what your daughter’s going to be like” or “This is how I want to be.”

But there are also a few detractors, mostly male, saying things like “I hope she likes ending up old, bitter, and alone.” As if the two options are:

Now, there are plenty of people who die alone, and I’m sure some of them are sad about it. There are plenty of people who break up with someone and later wish they hadn’t. But I have never in my life met a woman who broke up with a man because he was possessive or controlling and then spent the rest of her life single and wishing she’d stuck with him.
The men making this quasi-threat in its more extreme form– “Hey bitch, you’re never going to get another man if you dump them for that”– seem to be expressing a form of what I think of as “bigot universalism,” the tendency of people with bigoted views to assume that everyone in their group shares those views. In this case, they’re men who not only don’t see controlling behavior as wrong, but assume that all men engage in it and therefore a woman who doesn’t want to be controlled by a man is SOL if she wants to be with a man at all.

What I actually see far more commonly is woman expressing relief and even pride about having gotten away from a man who tried to control them, and who are now living life on their own terms, either with a new partner or on their own, happily or at least happier than they were with that man.

Notably, the men in the thread making the “You’ll die alone” argument always seem to be young– under 30 or so. The men calling out those guys skew a little older.